The Prayers of Jesus 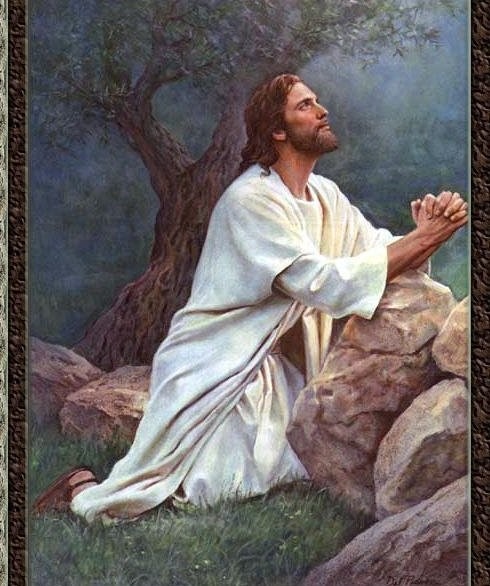 Contents Below:  The Prayers of Jesus, How Jesus Prayed, What Jesus Taught About Prayer, and My Prayer Examen: Am I Praying Like Jesus?

The Prayers of Jesus

Matthew 11:25-26
"I give praise to you, Father, Lord of heaven and earth, for although you have hidden these things from the wise and the learned you have revealed them to the childlike. Yes, Father, such has been your gracious will.”

Matthew 26:39, 42, and 44
“He advanced a little and fell prostrate in prayer, saying, My Father, if it is possible, let this cup pass from me; yet, not as I will, but as you ill…Withdrawing a second time, he prayed again, My Father, if it is not possible that this cup pass without my drinking it, your will be done!... He left them and withdrew again and prayed a third time, saying the same thing again.

Mark 13:34-36
Then he said to them, “My soul is sorrowful even to death. Remain here and keep watch.” He advanced a little and fell to the ground and prayed that if it were possible the hour might pass by him; he said, “Abba, Father, all things are possible to you. Take this cup away from me, but not what I will but what you will.”

Mark 15:34
And at three o’clock Jesus cried out in a loud voice, “Eloi, Eloi, lema sabachthani?”* which is translated, “My God, my God, why have you forsaken me?”

Luke 11:2-4
"When you pray, say: Father, hallowed be your name, your kingdom come.  Give us each day our daily bread and forgive us our sins for we ourselves forgive everyone in debt to us, and do not subject us to the final test."

Luke 22:41-44
After withdrawing about a stone’s throw from them and kneeling, he prayed, saying, “Father, if you are willing, take this cup away from me; still, not my will but yours be done.” And to strengthen him an angel from heaven appeared to him.  He was in such agony and he prayed so fervently that his sweat became like drops of blood falling on the ground.  When he rose from prayer and returned to his disciples, he found them sleeping from grief.

John 11:41-42
And Jesus raised his eyes and said, "Father, I thank you for hearing me.  I know that you always hear me; but because of the crowd here I have said this, that they may believe that you sent me."

John 12:27-28
"I am troubled now. Yet what should I say? 'Father, save me from this hour'? But it was for this purpose that I came to this hour. Father, glorify your name."

John 17:1-8
When Jesus had said this, he raised his eyes to heaven and said, "Father, the hour has come. Give glory to your son, so that your son may glorify you, just as you gave him authority over all people, so that he may give eternal life to all you gave him.  Now this is eternal life, that they should know you, the only true God, and the one whom you sent, Jesus Christ.  I glorified you on earth by accomplishing the work that you gave me to do. Now glorify me, Father, with you, with the glory that I had with you before the world began.   "I revealed your name to those whom you gave me out of the world. They belonged to you, and you gave them to me, and they have kept your word.  Now they know that everything you gave me is from you, because the words you gave to me I have given to them, and they accepted them and truly understood that I came from you, and they have believed that you sent me.

How Jesus Prayed
Matthew 14:23
After doing so, he went up on the mountain by himself to pray. When it was evening he was there alone.
Matthew 19:13
Then children were brought to him that he might lay his hands on them and pray.

Matthew 26:39, 42, and 44
“He advanced a little and fell prostrate in prayer…Withdrawing a second time…He left them and withdrew again and prayed a third time…”

Mark 1:35
Rising very early before dawn, he left and went off to a deserted place, where he prayed.

Mark 6:46
And when he had taken leave of them, he went off to the mountain to pray.

Luke 5:16
“…he would withdraw to deserted places to pray.”

Luke 6:12
“In those days he departed to the mountain to pray, and he spent the night in prayer to God.”

Luke 9:18
Once when Jesus was praying in solitude, and the disciples were with him

Luke 9:28
About eight days after he said this, he took Peter, John, and James and went up the mountain to pray.

Luke 11:1
He was praying in a certain place

Luke 21:37
“…at night he would leave and stay at the place called the Mount of Olives.”

Luke 22:39
“Then going out he went, as was his custom, to the Mount of Olives, and the disciples followed him.”

Luke 22:31 & 32
“Simon, Simon, behold Satan has demanded to sift all of you like wheat, but I have prayed that your own faith may not fail; and once you have turned back, you must strengthen your brothers.”

Luke 22:41-45
After withdrawing about a stone’s throw from them and kneeling, he prayed,…he prayed so fervently that his sweat became like drops of blood falling on the ground…he rose from prayer…”

What Jesus Taught About Prayer

Matthew 5:44 & 45
But I say to you, love your enemies, and pray for those who persecute you, that you may be children of your heavenly Father, for he makes his sun rise on the bad and the good, and causes rain to fall on the just and the unjust.

Matthew 6:5-8
When you pray, do not be like the hypocrites, who love to stand and pray in the synagogues and on street corners so that others may see them. Amen, I say to you, they have received their reward.  But when you pray, go to your inner room, close the door, and pray to your Father in secret. And your Father who sees in secret will repay you.  In praying, do not babble like the pagans, who think that they will be heard because of their many words.  Do not be like them. Your Father knows what you need before you ask him.

Matthew 6:9-13
“This is how you are to pray, Our Father in heaven, hallowed be your name, your kingdom come, your will be done, on earth as in heaven.  Give us today our daily bread; and forgive us our debts, as we forgive our debtors; and do not subject us to the final test, but deliver us from the evil one.
Matthew 18:19
Again, [amen,] I say to you, if two of you agree on earth about anything for which they are to pray, it shall be granted to them by my heavenly Father.

Matthew 21:13
And he said to them, “It is written: ‘My house shall be a house of prayer, but you are making it a den of thieves.”

Matthew 21:22
Whatever you ask for in prayer with faith, you will receive.”

Matthew 24:20 & 21
Pray that your flight not be in winter or on the sabbath,  for at that time there will be great tribulation, such as has not been since the beginning of the world until now, nor ever will be.

Matthew 26:41
Watch and pray that you may not undergo the test. The spirit is willing, but the flesh is weak.”

Mark 9:29
He said to them, “This kind can only come out through prayer.”

Mark 11:17
Then he taught them saying, “Is it not written: My house shall be called a house of prayer for all peoples’? But you have made it a den of thieves.”

Mark 11:24 & 25
Therefore I tell you, all that you ask for in prayer, believe that you will receive it and it shall be yours. When you stand to pray, forgive anyone against whom you have a grievance, so that your heavenly Father may in turn forgive you your transgressions.”

Mark 13:18 & 19
Pray that this does not happen in winter.   For those times will have tribulation such as has not been since the beginning of God’s creation until now, nor ever will be.

Luke 6:27 & 28
But to you who hear I say, love your enemies, do good to those who hate you, bless those who curse you, pray for those who mistreat you.

Luke 11:1-4
He was praying in a certain place, and when he had finished, one of his disciples said to him, “Lord, teach us to pray just as John taught his disciples.”   He said to them, “When you pray, say: Father, hallowed be your name, your kingdom come.  Give us each day our daily bread and forgive us our sins for we ourselves forgive everyone in debt to us, and do not subject us to the final test.”

Luke 18:1, 7, and 8
Then he told them a parable about the necessity for them to pray always without becoming weary… Will not God then secure the rights of his chosen ones who call out to him day and night? Will he be slow to answer them?  I tell you, he will see to it that justice is done for them speedily. But when the Son of Man comes, will he find faith on earth?”

Luke 21:36
Be vigilant at all times and pray that you have the strength to escape the tribulations that are imminent and to stand before the Son of Man.”

My Prayer Examen: Am I Praying Like Jesus?
(Our Prayer Ought to Imitate Jesus’ Example)

For Unity Between Heaven and Earth: Luke 11:2-4